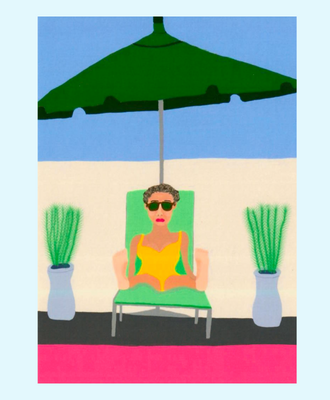 These digital drawings reflect a kind of second career for me. For many years I managed a trade magazine company in New York City. Throughout my earlier life, I assumed I had little ability to draw or produce art of any kind. That said, I always observed and admired what my wife, Amy, was up to with her serious lifelong commitment to the creation of art.

Then there was a moment when I was in a group meeting and listening, not so attentively, to a British presenter. He was really bad. Bored with his attempted humor and with the tedious story he was telling, I began to attempt to pencil sketch him. I surprised myself with the result. This led to a near obsession of mine, working to sketch people surreptitiously on the NYC subways, in airports, on beaches, at restaurants and other places. I began to look for situations where my subjects were stationary and available for enough time for me to try to capture my perception of their essence.  Next, I introduced color into the images by transferring the pencil sketches into my iPad. Using a stylus tool, certain painting apps allow for a myriad of colors, digital brush stroke types and sizing.

About choosing who or what to draw, it’s really a rather haphazard process for me. A lot depends on how the person is carrying themselves, his or her stance. I’m drawn to older subjects as most have more going on – the wrinkles, the sags, and the effects of time that can give people character. I especially like it when the elderly project a kind of defiant style – in contrast with today’s age of youth-driven fashion. My work is meant to celebrate these and other people who happen into my line of sight, touched by the choices they’ve made with their looks, and sometimes the humility and humor I see in them.