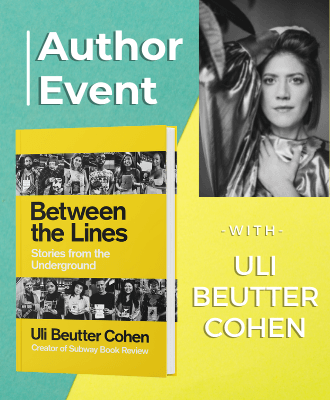 This event will take place over Zoom.

New York City is the birthplace of iconic stories. For nearly a decade, Uli Beutter Cohen rode the subway through New York City to observe, interview, and photograph some of its most imaginative people: the readers of books. Between The Lines (October 26th, Simon & Schuster) is the remarkable result—a collection of conversations that beautifully illuminate who we are and where we are going.

In this Zoom program, meet author Uli Beutter Cohen and her editor and friend, Yahdon Israel, as they discuss Uli’s debut book Between the Lines: Stories from the Underground.

About the Author: Uli is a fierce culture chronicler, diehard book lover, and self-proclaimed girlfriend of New York City. Born in a small town in Germany, Uli has spent thousands of hours documenting the minds and moods of the underground like a next-gen Werner Herzog, teasing out worlds of meaning via offbeat and honest conversations. In 2013, after a stroke of inspiration on the B train, Uli began asking fellow riders about their books—and their lives—and hasn’t stopped, not even during a global pandemic. The resulting Subway Book Review movement has over 250K social media devotees and a major influence on book trends, which Esquire termed “The Subway Book Review Effect.” Between The Lines: Stories from the Underground is her first book. Uli lives in Brooklyn. @theubc @subwaybookreview www.subwaybookreview.co.