Come on in!  Please feel free to visit the library, browse our books, and use the computers- no appointments necessary. Plaza Pick-Up will still be available for those who wish contactless pick-up. Follow these safety guidelines when you visit. 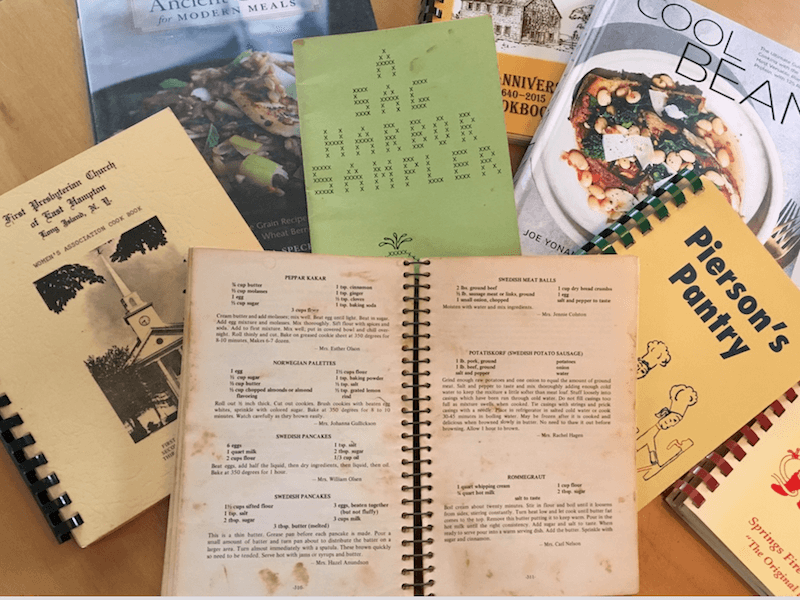 I was, as my sons like to tell anyone who will listen, the mother who went to the library in advance of bad weather instead of the food store. So it’s not surprising that just before we closed the doors of John Jermain seven weeks ago today, I ran from my office to the upper stacks and grabbed two cookbooks: Cool Beans by Joe Yonan and Ancient Grains for Modern Meals by Maria Speck.  They have stood me in good stead, even if most of my recipe-following lately is aspirational.

The beans and grains I already had in-house, thanks to my Norwegian sister-in-law who grew up on a small farm in southwestern Minnesota near the banks of the Yellow Medicine River.  “You have to learn how to cook,” she told me when it was clear that I would be joining the family.  I demurred—why bother, when I could go to her Saint Paul backyard and eat home-churned ice cream made from strawberries, milk, eggs, and honey all fresh from the farm. “I can teach you to make this,” she said after our first Christmas together when I discovered rommegraut, a pudding made from boiled cream topped with melted butter, cinnamon and sugar.  Still I demurred—if I had to actually measure the butter in that transcendent dish, I knew I would never enjoy it as much again.

But somewhere mid-way between the time my sister-in-law first offered lessons, and the time I finally learned to cook, my husband and I found ourselves living in a small lake cabin heated only by wood, far from anything convenient, let alone a convenience store. It was there I learned the importance of knowing what weeds were safe to eat. (Right now, in Sag Harbor?  Wild Mustard.) And I learned the importance of a pantry stocked with rice and beans. It was also there that I acquired my first cookbook, Favorite Recipes of Yellow Medicine Lutheran Church–from my sister-in-law, of course.

I don’t cook from that book much any more, except for the rommegraut, which I had to make for myself once I moved here. But in early March, when John Jermain patron Robert Browngardt donated a collection of East End church cookbooks to the library archives, I had a nearly-Proustian memory of all those canned-soup casseroles from the early years of my marriage (if canned soup and Proustian can take up space in a single sentence). So while we’ve been “sheltering in place” I’ve kept the book open on my kitchen counter.  Not so much to follow the recipes, but to feel again my sister-in–law’s hands on mine as she taught me to roll lefse so thin you could see through it.  And to remember, always, the gift she gave me “with love, and floury hands,” which is how she inscribed the book.

Her words are a reminder, as we eat our quarantine meals in relative solitude, that however far away we are from family and friends right now, the recipes we cook connect us to their love.  So to Eunice Sandell and Robert Browngardt—thank you. And to all of you who have kept in touch, and sent your love to our library—what are you cooking now?